What happens to the used Kits of football players after a match? 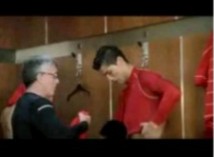 The number of times a kit is being used varies from different clubs to different occasions.
Normally, however big the club, they try to use the same kit for one or two matches at least to minimize the cost involved. They normally have a Kit Man who ensures that players have at least a clean pair of kit at their disposal at all times.
But players usually swap it with their opponents at full time. (at half time if you are Balotelli)  😂😂
There are also Kits printed for *Special Occasions* like the Champions League Final, where the match details are printed on the jerseys.
These kits are either exchanged with other players or goes up in auction or on the walls of player's homes as a Memorabilia.
About the normal League games, many big clubs let it go for Charity. While many small clubs cannot afford new kits each game, so they re-use them!