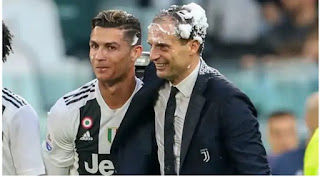 The Turin club claimed their their fifth Scudetto under their current manager and he insisted the job of winning the title is harder than it seems.

Juventus head coach Massimiliano Allegri said success does not come by chance after guiding the Italian giants to an eighth successive Serie A title.

Allegri has claimed five successive Scudetto honours since replacing Antonio Conte in 2014, however, he has been criticised for Juve's failure in Europe.

Juve – who have finished runners-up in the Champions League twice under Allegri amid their drought which goes back to 1996 – were eliminated by Ajax in the quarter-finals this season.

Discussing his critics, Allegri told reporters: "That's part of the game and it has to be accepted because it could also be stimulating.

"What I say, well rather than say I think, is that first of all I grew up trying to stay close to the best. And then I never criticised somebody who achieved a result or that did important things, in business or as a manager and stuff like that.

"One doesn't win by chance, one doesn't lead a business to make a €1 billion or €500 million if he is a moron. That's what I mean. But unfortunately, in order to think stuff like that, you mustn't be a chicken."

Allegri continued: "Things like this are beautiful because when I arrived here, in my first year, after the first Scudetto and then the second... winning five in a row wasn't easy, it was very hard. Some here even won eight, the club and some players.

"Today is a beautiful day, first of all because this way tomorrow [Sunday] we'll have a happy Easter. I put aside the elimination of Tuesday, which brought us disappointment and sadness. Luckily, we've had this game after three days, so important that it let us close the league."

"We achieved something no one can repeat in football history. In Italy it is really hard to win the Serie A. We did it more times with great players and great managers hungry for victories as the Juventus mind impose. Compliments to the club because it is very hard to win all these trophies."