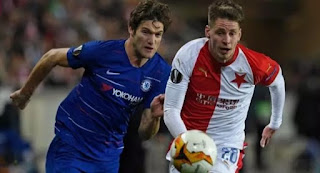 Following the conclusion of the quarter-final ties in the ongoing Europa League which were concluded on Thursday night, organisers of the competition have confirmed the fixtures for the semi-final matches which will be played on May 2 and 9.

Arsenal tutored by Unai Emery which qualified for the semis after defeating Napoli 1-0 in Italy a weeks after the Gunners had won the first leg 2-0 at the Emirates will now face Spanish side Valencia, who saw off Villarreal 2-0 on the night and 5-1 on aggregate.

London rivals, Chelsea which survived a scare from Slavia Prague to win 4-3 at Stamford Bridge and progressed 5-3 on aggregate in the quarterfinals will now take on German side Frankfurt which scaled through on away goals after losing 4-2 at Benfica, but claimed a 2-0 win at home.

The fixtures for the semi-finals which features two English teams, one Spanish team and a German side will begin on May 2 and 9, while the final is set to be staged in the city of Baku on Wednesday May 29.